The Story of the Blockchain: A Beginner's Guide to the Technology That Nobody Understands 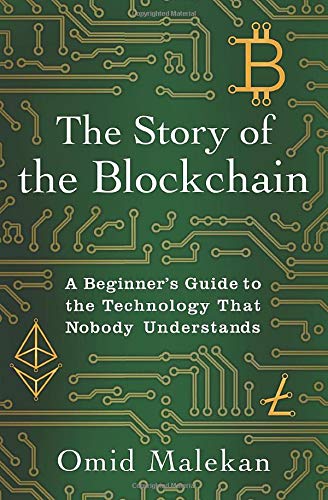 Blockchain technology is one of the most exciting ideas to come around in a long time, empowering cryptocoins like Bitcoin and Litecoin along with platforms such as Ripple and Ethereum. It has the potential to revolutionize money and banking while wrestling the rest of the internet away from today's gatekeepers.

But it’s notoriously hard to understand, as most of the existing explanations are either too technical or too ideological.

The Story of the Blockchain is a book written for the rest of us. Using a series of anecdotes from everyday life and analogies from more relatable areas, Omid Malekan takes you back to the very beginning, walking you through why this technology was invented in the first place, how it’s being utilized today, and why it might eventually impact everything.

Each chapter covers a unique aspect of this frontier technology, like privacy, initial coin offerings or what it's like to be invested in the coins themselves, but the overall book still flows like an easy to follow story, one that ends with a simple tutorial on how to safely make your first cryptocoin transactions. When all is said and done, you won't just understand this revolution. You'll be a part of it.

Omid Malekan has been involved in the blockchain space as an investor, advocate and consultant since 2014, making every possible mistake so you won’t have to. A graduate of Columbia University and a former Wall Street trader, he is best known for a series of viral YouTube cartoons that explain complicated economic concepts using everyday language. His work has also appeared in the New York Times, Wall Street Journal, Forbes.com and on iTunes.

How to choose your pairs for trading with Gunbot

- March 27, 2019
Gunbot allows you to trade an enormous amount of crypto currency pairs, dependent on the exchange you choose to use it on. Trading pars consist on your primary coin, which is the currency you are purchasing with, such as Bitcoin, and your secondary coin will be the coin you chose to purchase, such as Binance coin. There are numerous indicators you can focus on in order to minimize your risk, which I will cover in this article. Table of Contents Step One – Choosing an exchange to trade on Step Two – Determining which primary currency you want to purchase with Step Three – Determining which secondary currency you want to purchase Step Four – Verifying that the trading pair is good for trading Step Five – Setting a stop-loss…or not 1. Choosing an exchange to trade on. The Gunbot crypto trading bot is available for a wide variety of exchanges, and plan on expanding onto other exchanges as they prove their viability. Currently we are available for Binance, Bitfinex, Bitmex
Read more